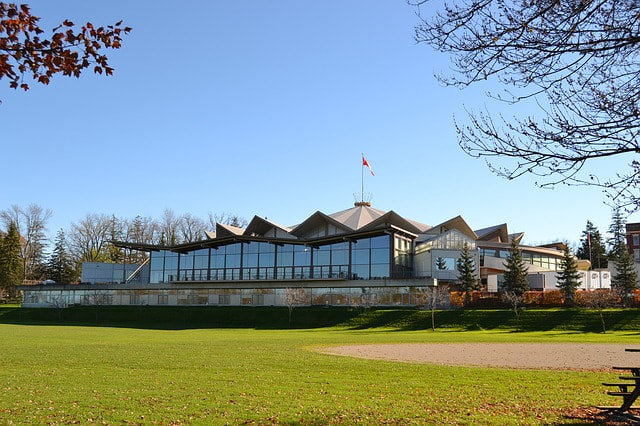 Northern Illinois University Annuitants Association
Monday, July 23 – Friday, July 27, 2018,
Stratford, Ontario, Canada
The Chicago Sun-Times has said, "What the Chicago Symphony is to orchestras, the Metropolitan is to opera and the New York City Ballet is to dance, the Stratford Festival is to classic theater," and Clive Barnes of The New York Post has called Stratford "one of the three great English-speaking classic theaters, together with Britain's National Theater and its Royal Shakespeare Company." Famous alumni of Stratford include William Shatner and Christopher Plummer and many others.

A week prior to the festival, the Northern Illinois Travel Society holds a group meeting in De Kalb to acquaint you with Stratford and the theatrical aspects of the plays you will be seeing. During your stay in Stratford, Steven Johnson is available to answer questions during the trip.
The trip includes three days of exceptional performances at three different theaters (Festival, AVON, Studio). To make your travel experience even more rewarding and pleasurable, the Northern Illinois Travel Society’s Stratford experience offers a pre-trip meeting, convivial travel to Stratford with overnight at the Elm Hurst Inn & Spa, short walking tour of Stratford, AVON cruise, High tea luncheon and the BEST available seats (premium or spotlight row seating). Space is limited to only 30 theater lovers.

You will enjoy the following program features: 3 or 5 performances and accommodations in Elm Hurst Inn & Spa and the Queen’s Inn, AVON river cruise, historical walking tour of Stratford, high tea luncheon in Shakespeare, private talk with actors and more. With all this, there's never been a better year to join us for Stratford--and we hope you'll agree! Join us to celebrate 65 seasons at the festival.
COMEDY OF ERRORS
Double Trouble. Separated in infancy, two pairs of twins are now in the same city, each unaware of the presence of their long-lost counterparts. Hilarity mounts as the look-alikes are repeatedly mistaken for each other - till unexpected reunions mend many yearning hearts. Cast includes Qasim Khan and Juan Chioran.
By WILLIAM SHAKESPEARE | Directed by KEIRA LOUGHRAN
LONG DAY’S JOURNEY INTO NIGHT
Home is where the heart aches. In this searing cry from the heart, one of the 20th century's greatest playwrights paints a haunting portrait of his own emotionally damaged family as they struggle - under crushing burdens of guilt, resentment and dread - to maintain the unifying bonds of love. Features Seanna McKenna and Scott Wentworth.
By EUGENE O'NEILL | Directed by MILES POTTER
ROCKY HORROR SHOW
Sex and drag and rock n' roll. It's the most fun you can have in fishnets! A cult classic for more than forty years, this brilliant pastiche of B-movie horror and sci-fi tropes, with its irresistible rock-and roll score, invites us to shed our inhibitions and explore our wildest dreams and desires featuring Dan Chameroy, Jennifer Rider-Shaw and Steve Ross.
Book, Music and Lyrics by RICHARD O'BRIEN | Directed and Choreographed by DONNA FEORE By arrangement with Rocky Horror Company Limited
TO KILL A MOCKINGBIRD
Justice isn't always blind. Justice is pitted against bigotry when white lawyer Atticus Finch defends a black man unjustly accused of rape - and thereby inspires in his young daughter, Scout, a passionate belief in the importance of moral courage and truth in a world of hatred and lies. Features Jonathan Goad, Irene Pool, Joseph Ziegler and Michelle Giroux.
Based upon the Pulitzer Prize-winning novel by HARPER LEE | Dramatized by CHRISTOPHER SERGEL | Directed by NIGEL SHAWN WILLIAMS
CORIOLANUS
The faster you rise, the harder you fall. He's fearless on the battlefield - but in the pitfall-laden world of politics, he's doomed by his contempt for the common people. This stunning production by genre-defying director Robert Lepage explores the age-old tensions that still tear at the heart of democracy. Features Andre Sills, Graham Abbey, Tom McCamus, Stephen Ouimette, Lucy Peacock and Tom Rooney.
By WILLIAM SHAKESPEARE | Directed by ROBERT LEPAGE
THE TEMPEST
Forgive and be free. In Shakespeare's great drama of loss and reconciliation, a long-deposed ruler uses magical arts to bring within her power the enemies who robbed her of her throne and marooned her on a remote island. But what revenge does she mean to take? Features Martha Henry, Graham Abbey, Brent Carver, Tom McCamus, Stephen Ouimette, Lucy Peacock and Chick Reid.
By WILLIAM SHAKESPEARE | Directed by ANTONI CIMOLINO
AN IDEAL HUSBAND
Little lies. Big laughs. Sir Robert Chiltern enjoys a reputation as the only truly honest man in politics - till an unwelcome visitor threatens to reveal the secret that could destroy his career. Intrigue and blackmail drive a suspenseful comedy-drama that sparkles with Wilde's inimitable wit. Features Tim Campbell and Brad Hodder
By OSCAR WILDE | Directed by LEZLIE WADE
BRONTE
A sisterhood of secrecy. Three sisters live in poverty with their ailing father and dissolute, dying brother, jealously guarding the secrets of their disappointed hearts. But desperation dirves them to a life-changing choice, as they reveal the literary talents that will win them world-wide fame.
By JORDI MAND | Directed by VANESSA PORTEOUS ***WORLD PREMIER***